The development of children’s Fundamental Movement Skills (FMS) at Clavering Primary School is a significant step towards establishing a lifelong commitment to healthy, active lifestyles.

FMS are the building blocks for movement. They are the skills which children need to participate successfully in all types of games, physical activities and sports.

FMS can be categorised under three headings:

Examples of these skills are shown below:

* These movements are performed both dynamically and statically in place.

Within the Clavering Curriculum for Physical Education (PE) and other physical activities offered at school, we devote a significant amount of time and expertise to improving the fundamental motor skills of our pupils.

Having researched and analysed outstanding practice in teaching FMS globally, we have identified twelve FMS that we consider to be essential if our pupils are going to successfully participate in the many physical activities, games and sports offered at Clavering:

These twelve skills were selected because together they represent a solid formation for the development of specialised skills, enabling pupils to participate in a wide range of physical activities.

WHY DO WE TEACH FUNDAMENTAL MOVEMENT SKILLS (FMS)?

Children who have achieved proficiency in FMS have been found to have better self-esteem, socialisation skills and a more positive attitude towards physical activity. Research indicates that the improvement in self-esteem and confidence in performing FMS has a flow-on effect to other areas of a child’s education. For example, improvement in confidence in physical coordination has been found to help develop proficiency in reading and writing.

Watch the video below to learn how FMS fit in with the Youth Physical Development Model (which has been incorporated into the Clavering Curriculum for PE):

HOW DO OUR CHILDREN DEVELOP FMS?

Contrary to popular belief, children do not pick up FMS naturally as part of their normal growth and development. Children need to be taught these skills and given opportunities to practise them.

Children also need to be provided with:

It is reasonable to assume that, given instruction, encouragement and the opportunity to practise, boys and girls can be equally proficient in all twelve FMS before they leave Clavering Primary School.

HOW LONG DOES IT TAKE OUR CHILDREN TO LEARN FMS?

It is easy to underestimate the amount of time it takes to develop proficiency in FMS. Factors like the complexity of the skill, the age of the learner and the instructional methods used play a large part in the amount of time it takes to become proficient in a skill. Research suggests that it takes between 240 and 600 minutes of instruction time for the average pupil to become proficient in one fundamental movement skill.

HOW ARE FMS LINKED TO SPORT-SPECIFIC SKILLS?

FMS provide the building blocks that enable a child to progress to developing sport-specific skills.

We cannot expect children to be proficient in producing sport-specific movements before they have mastered FMS.

WHEN SHOULD FMS BE TAUGHT?

The optimal period for introducing FMS is in the early years of schooling. There are several reasons for this:

WHEN DO WE TEACH OUR TWELVE IDENTIFIED FMS?

At Clavering Primary School, we have developed a planning guide for our pupils’ development of each FMS.

In addition, each of our twelve identified FMS have been broken down into 5-7 easily identifiable components. These components are described as either ‘introductory’ or ‘fine-tuning’:

The ordering of components as introductory or fine-tuning has been based upon studies which reported the percentage of children at different ages who had mastered each component of a skill. It has also been based on studies of childhood development which look at how children progressively develop control of their bodies.

Four FMS are introduced for focused teaching each year in Reception, Year 1 and Year 2; however, pupils will also be exposed to activities that include the other eight FMS. Giving pupils adequate opportunities to practise four skills each year should ensure that they develop proficiency in the introductory components of each skill by the end of that year.

Once pupils have developed the introductory components of a skill, it is important that teaching and learning shift focus to the development of the fine-tuning components. Our framework suggests that each skill needs a three-year period of practice and consolidation for this to occur.

An important aim of the Clavering Curriculum for PE is that our pupils should be able to demonstrate proficiency in all twelve FMS by the end of Year 6; however, with adequate learning and practice time, most pupils, given their stage of growth and development, should be able to demonstrate the FMS earlier than this, as indicated in our framework.

THE CLAVERING FRAMEWORK FOR TEACHING FMS

The table below is taken from our Clavering Curriculum for PE: 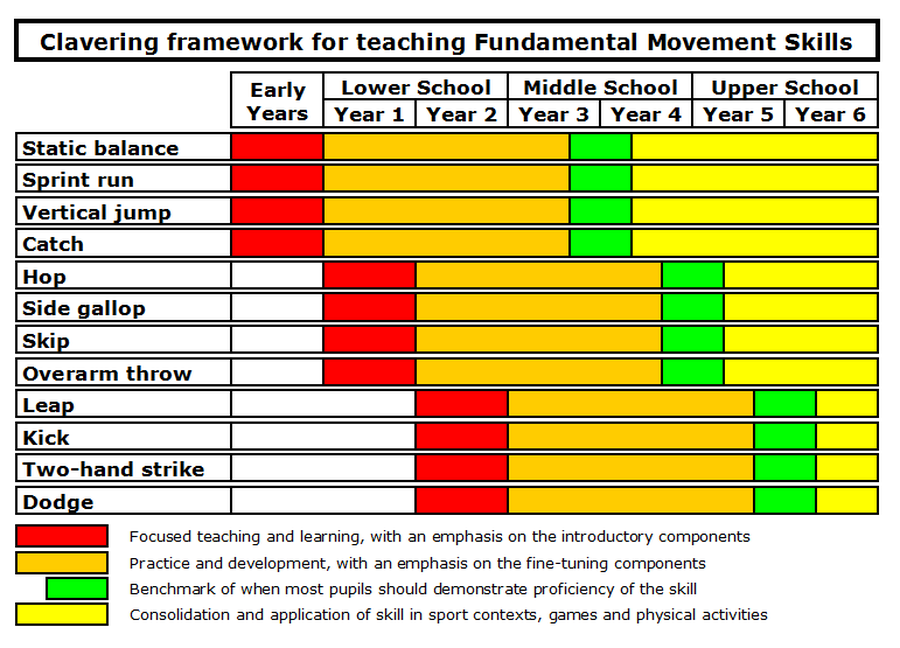 A WORD OF WARNING: PHYSICAL LITERACY AND FMS

Fundamental Movement Skills are an essential part of physical literacy; however, they are not all of it!

At Clavering, we follow the Youth Sport Trust’s definition of physical literacy: ‘‘the motivation, confidence, physical competence, knowledge and understanding that provides children with the movement foundation for lifelong participation in physical activity’ and we understand that ‘enabling children to be physically literate supports their development as competent, confident and healthy movers.’

When we are teaching FMS, we are developing motor competence in our children; however, if we just deliver physical literacy through FMS, our children will not get the whole picture. FMS have to be developed in the context of using them in the right space, selecting the right movement skill for the right environment, being aware of others in space, etc. So if we just teach form of the basic skills, we are not delivering physical literacy. This is why our PE lessons need to cover all other aspects of physical literacy and the appropriate physical qualities of the Youth Physical Development Model.